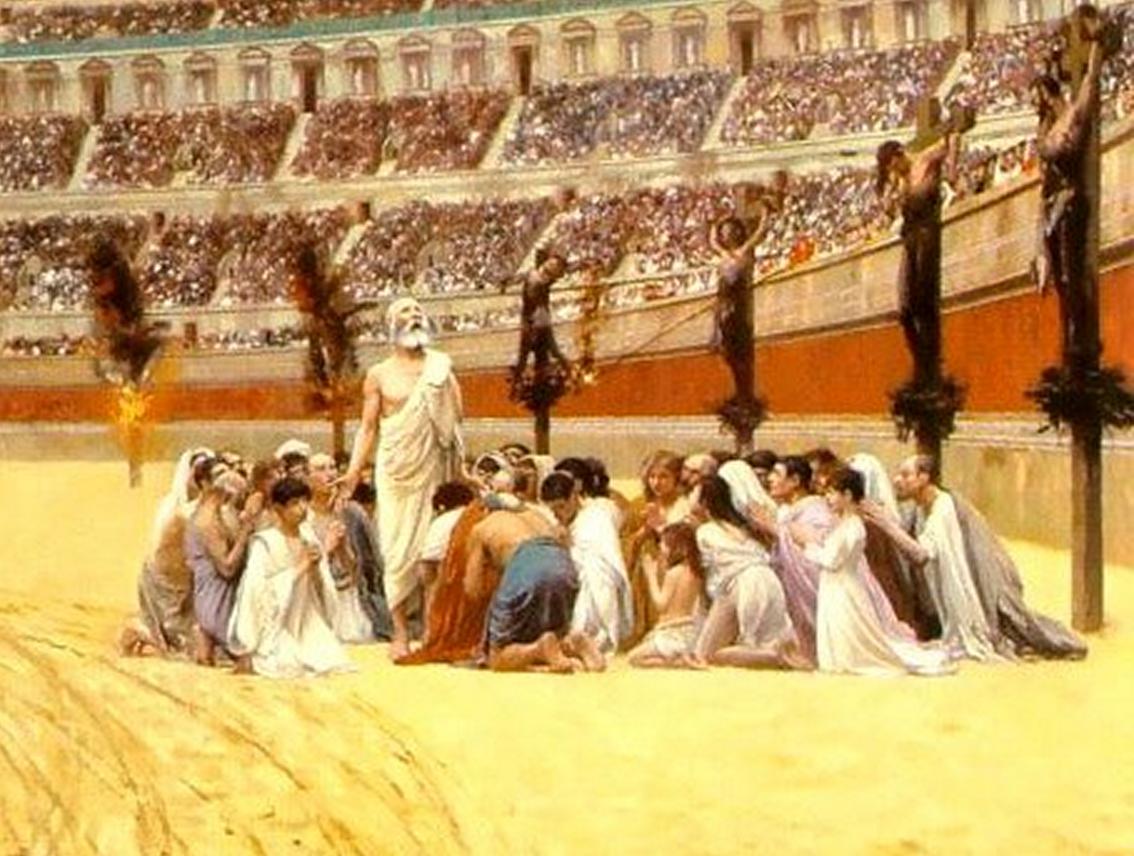 The fundamental question of our era centers on the nature of our culture going into the future relative to our past. Stated plainly how much of what we once were will we be going into the future? All other matters of political theory, sociology, and geopolitics begin from the answer to that question; if the answer to that question indicates that things fundamentally change. If the transformative change significantly alters culture, how might that affect openly practiced, authentic Christianity? It is just that important of a question. Failure to recognize the question or to frame it properly is common, particularly among those that the answers will affect the most.

Transformative and revolutionary times happen, we have seen them across human history. Technology often is the catalyst, but ideas follow or perhaps lead. The proximate cause is always debatable by historians. But we know that three things always accompany these events, 1) technological advances, leaps really, 2) societal upheaval and 3) cultural change. Often, empires fall, the power structures realign. People also gain or lose ‘religion’ coming out of these events. All of the Great Awakenings have closely followed these periods of change. Philosophy and ideology change. Any and all of those items occur regularly across history, but they seem to always accompany great transformations, and they seem to be intensified in the scope of the change during these periods.

An astute reader may be inclined to stop right here, to read no further. Certainly, these things occur, and likely will occur, but what can we know of it and what does it matter to each reader's particular subject of interest?

I would suggest two points to consider. First, history seems to indicate that in each previous transformative period, the previous industrial revolutions, as the total impact of new technology manifests as greater, the impact to secondary impacts also increase. For instance, spinning ginnies and cottage industry changed much, but much less than water and coal factory mills which built upon societal changes realized through the cottage industries. Second, these transformative periods are not stand-alone events, the changes brought about by one set the conditions for the next. Changes in patterns of life, culture, and ideas build rather than reset and begin anew. This progression is invariably affected by man, the nature of man, and our place in history relative to the fall. Things corrupt over time, even noble ideas.

The first industrial revolution is still with us; its effects. The ideologies that developed from the working conditions in that era shaped the twentieth century. Karl Marx, the ‘48s, and everything that derived from or developed in opposition to those events are still with us. Kantianism too, and everything that gave birth to. Our de facto official religion came from the milieu of the first industrial revolution. It needed shaping by subsequent events, but it was formed* in that era with Kant, Marx, and others.

*I use formed rather than began because the beginning of the ideas can be traced perhaps a century prior and came out of The Enlightenment, which itself was a product of a previous technological revolution. But Marx and Kant gave it sufficient form and we might begin with them.

Ideology, once untethered from rational thought bound by acknowledgment of absolute truth takes on a life of its own. Denial of truth, the ultimate deception, is and always has been the primary weapon of the enemy of mankind and God. The pollution of the mind of man, so that we cannot accept truth is an ancient goal. An ideology, that appears rational, that provides succor to men and their fallen nature, that even when it borders on absurdity can retain an audience, for it has already killed truth, that is powerful and transformative all by itself. [1] If history moves into a transformative period, with that sort of ideology being prevalent, can we imagine what might come out of the other side of that sausage maker?

Some would protest that in each of the previous periods I have discussed, awakenings occurred. I would ask, are awakenings a good thing, in the aggregate? The emotional fervor always turns to something else. It generally turns to social crusades and very often has played a role in beginning wars. Have we not seen cults, heresies, error, and bad theology spring from the emotivism of awakenings? These too remain with us - the error and heresy.

If we accept that man is fallen and falls further as time and space move us further from the fall, that our fallen nature infects every idea and institution that we build we might then understand something of the nature of the ideology that began in transformation and was shaped by periods of further transformation and emotional popular swings. We might, if we look, begin to understand how that ideology shaped religion and theology, how the emotionality of the awakenings and the deviations from authentic and orthodox teaching was not an independent event. We might admit if we are honest, that these things build upon each other, falling further away from truth with each generation.

If we hold a proper view of history as a progression away from the fall, a progression marked by our God-given ability to invent and improve, but marred by our nature, then we might come to fully see the position in which we find ourselves. Here we sit, poised on the verge of another great transformation. A fourth industrial revolution to use the term of those seeking it. We could deny this, we could hold to enlightenment ideals that tell us we can improve, we can progress, we can perfect – that would be a very humanist position. It would deny revealed truth and observations from history.

We cannot know, not precisely, what our world will look like on the other end of this transformation. Futurists are good at framing questions, but often poor at getting details correct. But we can have some sense of the nature of it. We sense it will be very automated and very connected. That machines will play a much more important role in this transformation than at any point in the past. Machines will not only act and move things and perform mechanical work, but they will also think, at least in so far as complex algorithms are actually thoughts. The promise of the information age, unfulfilled, that machines would make man’s life more leisurely will be fulfilled it seems, at a cost. Man himself, the ordinary man will be less valuable. In a perverse sense, and in the same way that ideology has separated man from ultimate truth, making the common man redundant is an assault on creation itself. We can see a theme in the progress of history if we are willing to look.

We cannot know the details, but we can frame the questions. What might ‘tomorrow’ look like in a world where a post-truth ideology has ascended to the status of religion and man, the ordinary man, is diminished to a redundant status? If we can sense now the open hostility that the prevalent ideology has toward the old ways, toward Christianity that seeks to adhere to ultimate and revealed truths, what might those attitudes look like during the emotivism of an awakening? Christianity was the predominant religion going into all past awakenings, it is not now predominant. What if the awakening that results from this transformation is based upon the current post-truth ideological religion? What will that look like? We already have some sense.

We cannot know for certain, we do not have a crystal ball some would say. Others would argue that throughout history, no matter the circumstance, Christianity was practiced. That is undeniable. I would also argue, that we are on a progressively elaborating timeline, history is an example, not a rule. Things change as the variables that affect the equation change. Much has and is about to change.

I have only three points that I would suggest will be revealed, in time, as axioms, for your consideration. First, we are already a decadent people, and the leisure, connectedness that breeds isolation and redundancy that seems promised by our near transformative stage will breed more decadence. Second, every culture that has abandoned truth has turned first to absurdity, then tyranny and finally collapse. Third, the current post-truth ideology that rules the culture must, by logical extrapolation, lead to authoritarianism. [2]

We already know something of how invasive and pervasive technology can be, and we can envision how much more that will manifest as the metaverse replaces reality for many. We do not need a crystal ball to add decadence, overt hostility toward truth, and a natural propensity toward authoritarianism to a ubiquitous ‘system of systems’ that touches all parts of our lives to sense the danger.

I am not a thonomist nor an itegralist. I do not follow Rushdoony. I have read Francis Schaeffer and I disagree with much that he wrote. But I do respect that he articulated the central theme better than any other. Once a civilization abandons truth as a pillar that guides all that civilization and culture will fall. He is not wrong in that simple thesis. And we know, great systems do not fall without conflict. The coming transformation may make it impossible for even failed systems to fall. It cannot stop the ideology, the emotivism, the hatred of truth and it cannot stop the ramifications of that.

We cannot know the future, we have no crystal balls, but we are gifted with discernment, eyes to see and minds to think. We can see the trends. We know that the ideology will not be defeated, not with ideas, only truth can defeat it. Most have closed their minds to the truth. And even though we through our actions cannot change this progression of history, should we merely fiddle? It appears it is impossible to right the ship now, to turn back absurdity to some point where dialogue might have mattered, where we might hope our fellow citizens would occasionally elect a decent man, a Mr. Smith. Only God, if he willed it, could open the hearts of an entire people, of a culture hell-bent on self-destruction and self-oppression. Despite that, is it the right thing to simply ignore it? To say we cannot know, we cannot control it, we ought not to want to?

Laying safe in a bed, dying, knowing we spent our time and resources merely doing the business of the day, never even considering that those clouds on the horizon might indeed be storm clouds will we console ourselves that we kept side b off the agenda? Were we good parents, leaders, and elders if we never suggested we check the storm shutters and at least considered ways and means that our tribes might weather the storm?

We cannot, should not, and will not change the course. The ordinary and proper things that many do each day are the very things we are commanded to do. But we do not have to be blind and willfully ignorant to real danger. We do not have to intentionally refuse to state that it exists. We are not prohibited from laying aside figurative and literal provisions to help weather the storm. Is not denying the signs a form of lying by omission and a comfortable way to keep one’s head in the sand, fighting issues that will not matter if those that hate you get their way? [3]