I sit, happily ensconced on my balcony overlooking my little piece of the world on a beautiful Friday morning, I am reminded of two things. Social media was a terrible mistake and enormous changes are afoot, just under the surface in terms of political alignment.

Most do not sense the developing realignment. Others know something is changing but do not understand it. Of the latter, many of those are angry, confused, and scrambling to find their people, a place to fit in. The talk of change is not new, it has been with us since Obama was elected, it did not arise as a reaction to Obama per se, but rather to the mechanism that enabled him to be elected at all. The populism that fueled MAGA and elected trump only increased these conversations. Discussions are held in the virtual dark and smokey corners of a tavern not unlike perhaps The Green Dragon of the Inklings or City Tavern in Philadelphia. We mere mortals, not invited to sit and have a stout and cigar and parley in this developing theme, can catch glimpses of the proceedings in some long-form articles and, if you are astute, in snippets on social media.

TL:DR  You on the alt-right have many valid criticisms of the system and of conservatism. Just be careful which snake-oil salesmen you buy your philosophy and ideology from. Those Straussians that court you so hard are wrong and dangerous. Look back to paleo-conservative thinkers.

There are, of course, competing camps of intellectuals and pseudo-intellectuals, disaffected souls now refugees from neoliberalism and neoconservatism. Many never fit into either category, sitting just outside the fire waiting for the inevitable failure of both. Of those we might call ‘rightists’ (and this term is problematic at best), we find West Coast Straussians (Jaffites), Federal Vision Reformed thinkers, a particular brand of Catholic Traditionalists, and others. These were the vanguard, those that subtly talked of a realignment, the absolute need for such, and dispensing with many of the flaws of commercialized neoconservatism. But these smokey ideas, from pompous men, were never going to appeal broadly, and perhaps they knew as much.

There was another trend on the ‘right’, it began near the end of the 1990s and accelerated after 9/11. libertarians and young paleoconservatives, disaffected by the utter routing of paleo-conservatism by the Jaffites, the rise of neoconservatives, and the wars of empire drifted off into an intellectual void. In that void they found the writings of Theodore Kaczynski and then of Hegel, Nietzsche and Heidegger. Eventually, they found Alexander Dugin. The alt-right, born of disaffected young traditionalists that came to disdain the government as it stood and the system that enabled it, is not and never was just childish Groypers – their memes had thought and deep meaning behind them; secret knowledge they knew was there.

The United States is ruled by an oligarchy. A partnership between corporations, political interests, and institutions (both within and outside the government). The young alt-right recognizes this, the folks above that have called for a realignment recognize it. There are groups on the ‘left’ that recognize it. The oligarchy is not per se ideological, we make a mistake assuming that. It exists for power and operates to maintain power. The ideologies that individual members and groups within that class espouse are merely designed to keep power. To appease the plebes, to secure support, and to maintain position. The intellectuals that have long called for a realignment know this, to them the alt-right is a vehicle to influence the oligarchy, to obtain a seat at the table. These intellectuals believe they are ultimately so smart they can influence the outcome and control their tools.

I watched one of the minor front-men of this school reveal parts of the realignment last evening on Tim Pool’s podcast (now deleted). It met with the expected pushback, but I suspect this is by design. Throw out the idea and let it percolate. 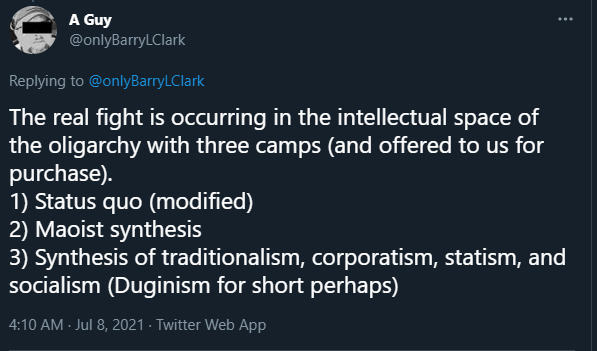 There are three paths forward on the table at present, none of which align with traditional left-right dichotomy. The real battle is being fought to both shape these and to present them to us for purchase.

If a traditionalist of the paleoconservative persuasion offers the black pill it is merely because the fact is of all the options on the table, none of them offer either conservatism, liberty or truly protect tradition. But this seems defeatist to those that are confused.

And many are confused at present. Many fell for the populist promises of Trump and are now realizing that none of it was true, it was never about any of the fundamental stuff promised. In the end, it was more dystopian and brought on more massive government than at most any point in our history. They resist the black pill, and by that, I mean grim reality. They acknowledge the oligarchy, that institutions are captured and complicit and that politics has simply not worked. They spent so much of last year being apologists for what they knew in their hearts was wrong. It is hard to come to terms with this. (One such chap refused to dialogue and blocked me for pointing this out.)

These are the exact sorts that the intellectual class above needs, it is to these they will offer hope in the form of solutions hitherto unimaginable. These unwitting, confused, and lost souls, when joined with the ideological fire of the alt-right and fueled by real intellectual propellant in the form of new way (fourth way) thinking as offered by Alexander Dugin has the makings of a realignment. The combined weight of affable social media personalities (many of which are constructs), midwit sycophants that follow and boost them, a detailed political philosophy, and perhaps a ‘hero-savior’ political personality is enough to carry the masses. This has the potential of a solution, a way to recapture institutions, to get corporations on board and to grab the attention of the oligarchy. It is a ‘solution’, it appears better than “defeatism” and some recommendation that we engaged in a generational struggle….but it is dangerous.

@realmajordan wisely points out that the mutations and permutations of disaffected libertarians and paleoconservatives into what has become the alt-right (a splinter, not all) was much more complex than depicted above. Indeed it was. There was the anti-war movement, Ron Paul's support, and the Tea Party. The establishment crushed or usurped those movements, but the angst of the core remained. Not the ordinary voter, but the young adult that began to see it all as rigged.

There was a divorce of sorts and some went on to support Occupy Wall Street - many that supported Ron Paul could easily get on board with that, the core principles are the same. Afterward, some of those went on to become Bernie supporters and when the establishment crushed Bernie populism twice (and Bernie took his 30 silver and said nothing) many came back to the alt-right and often brought Bernie supporters with them. Groypers welcomed them back with subtle memes.

As for the interview I mentioned above; It is not surprising that Tim Pool, a former OWS guy would host Darren Beattie, a West Coast Straussian as Beattie revealed some of the big ideas floating around to 'solve' our dilemmas. It all fits. The criticism (often valid), comes from the same place for all of the disparate groups that will soon synthesize into a fourth-way opposition. Those Straussians are a crafty lot, never willing to be left on the sidelines.

It is easy to lose the theme, the forest, for the trees. The theme is there developed a young cohort that saw the system for what it is and tried and lost on many occasions to use the system to fix it. They are ready for something more out of the box now. They are ready for a big idea, and some people that believe themselves very smart have just such an idea.