Throw out the Quill 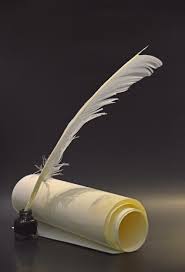 ShareTweet
I think this was all a Hegelian dialectic. I saw the initial talk and drastic suggestions early on this year from some 'conservative' Integralist Catholic friends, lawyers no less (Jesuit lawyers can be scary). I dismissed what they said as fringe ideas. That something nefarious was at play was apparent in the absurd support the Democratic party threw at false causes that created violence. And now a Straussian Supreme Court nominee? It is time to put away the quill I think, we are finished. Leviathan comes.
All of this while so many wanted to argue over the issues they told us to argue about. 'love thy neighbor' (stay home, wear a mask, justice matters) Russia, Ukraine, mailboxes, etc., etc. etc. So few would listen, step back, and see that something bigger and more nefarious was at play. It is clearer now, and tomorrow, if this plays out as people are predicting, it will be crystal clear.

Talking with a new friend today at lunch, us looking at the world and what we ought to do for our families and our communities. Of all the scenarios, there were a couple that made me say, ‘I am out, if that happens I withdraw from all this’.

I cannot be certain, nothing is proven, but it appears that the news today regarding the nomination of Amy Coney Barrett for the Supreme Court puts a lot of puzzle pieces that were previously missing on the table. Look up Jacobson v. Massachusetts. Barrett is the Federalist Society pick, she ruled in 2020 using justification from Jacobson.

I have made my arguments against Straussians very clear (Claremont types, Federalists, Jaffeites, etc.) See Centralization and the New American Order for one of my better arguments related to those folks. They are dangerous thinkers.

Lincoln was dangerous and led what became America’s third revolution. (The First War of the New Order) The Federalists and their ilk have since that war pressed for a more powerful central government and a unitary executive. These sorts of ideas are as dangerous as the Marxism espoused by BLM.

The Supreme Court has become key to what we become; it has defined the culture war. Appointing a justice that would vote for decades to expand the government will cement our slide toward authoritarianism.

Is this what the color revolution was all about? All the nonsense in the street, with the Democratic party supporting it, while Trump concedes to the Straussians and lock-down our future (figuratively and literally)? Were we all hoaxed in a massive triple play?

I pray that this does not happen, maybe the news leaks have it wrong. We should all, left, right, and center, pray that Trump nominates someone else. We will know tomorrow it seems. No matter what happens with the election this appointment, if it is a Straussian is enormous.

Imagine this additional nightmare scenario – Trump appoints Barrett, he loses the election, the Democrats take the senate and do as they have threatened, appoint two additional justices. Barrett and Roberts (and often Kavanaugh) would join the four current liberal justices and the two new ones in systematically dismantling the entire Constitution. Was that always the plan? If Trump nominates Barrett – perhaps.

Or did this happen because Trump cannot afford to make the Federalist Society people mad, the US facing a critical election, and all the shenanigans that have gone on for the last four years? Did they corner him? I do not know, but nominating Barrett is certainly going along with the status quo folks.

If this happens, I am out! On the day/night that the election is finally ‘decided’, either way, I am out. If I had hope that anything that is actually wrong in America might have been fixed, it will all be lost with another Straussian on the bench. I will delete all my stuff online, write no more, and disappear into my various hobbies. I will put the quill away. Ideas and arguments will no longer matter, the future is clear at that point. Nobody wins, I will not fight this.

Note: "Progressively" minded folks, don't celebrate. Your folks have proven themselves to be evil this year manipulating people to hate, fear and violence. All this potentially means is that the color revolution included more than just your favorite folks. We will all rue this in our lifetime.

Progressives - Your insidiously stupid support for absurd, illiberal ideologies, particularly when they manifested into crybaby tantrums, violence, and hate in the street was prima facie evidence to most reasonable people that you have no idea of what you say or perhaps even why you hold the worldview you do. You have much responsibility for this. We ought not been so divided right now as to allow bigger machinations to defeat us.

Conservatives - You have been correct to fear the radicalization of the increasingly Marxist left, particularly when they openly supported violence. This has blinded you and left you only with 'hope' of a savior. Barrett is that only insofar as Franco saved Spain from the murderous communist rabble. Many of you have a responsibility in this also. This will be a bitter pill.

Christians - if your actual understanding of the Bible made you susceptible to fall for Marxist lies this year and tacitly support violence and hate; you do not understand the Biblical message. Find a new Bible, teacher, church, or preacher. If you get caught up in the SCOTUS talk about 'wombs' and the right of deranged people to celebrate the murder of unborn children,  you are missing everything God told us and the bigger things occurring right now. There are reasons to be concerned about a Straussian on the bench, but her opposing abortion is actually a redeeming quality. If you don't see that, I cannot help you.

We were played. However, of all the ways this enigma might have revealed itself - the true nature of it - I am happy, at least, to have life and societal order (perhaps in the near/mid-term only) over what many of us feared was behind all of this. The lesser of two evils.

What we learned (or should have)

I get it, in talks over the last few months with people that spent a lot of time in school, sometimes they had no idea what I was talking about - some of the terms. perhaps I spent too much of my life deployed to crap places and reading esoteric stuff in my off time to stay out of trouble. If you came into 2020 not fully understanding the Marxist plan from the early 1900s, if you do not understand what a Straussian is, then perhaps you do not know how both of those seemingly different ideologies end up in something that looks the same, totalitarianism.

Heck, if you are a moderate Democrat and do not understand that you are actually a conservative (not the 'R'/'D' sort), but the type that stands for preserving our enlightenment based system (modified by received traditions) then you probably have not understood a word I have said either.

We had something of a chance to turn the tide, to restore something of our classical liberal traditions. It was a sliver of a chance and there were always enemies from a growing radicalized and increasingly Marxist Democrat party and from Straussians and Neocons in the Republican party. The establishment has spoken, they have won. They divided us and won. Mark it down. We were played and few saw it and few will really understand when and how it happened.

Carry on with watching 'team sports' of Dems versus Republicans and posting memes! This is playing out precisely as Aldous Huxley described. Leviathan cometh. We will not get a second bite at the apple, or another chance to stop those that are really in charge.