The Age of Entitlement

Rod Dreher posted a piece reviewing The Age of Entitlement, by Christopher Caldwell.  He recommends the book and the dark, foreboding passages he quotes relative to what all this means to the future are things I agree with and write about here. It is a book I plan to soon read.

Dreher argues, “This is why, absent strong political and judicial action to protect individual rights, totalitarian mechanisms — government and private — for demolishing resistance to “civil rights,” as defined by progressives, are inevitable.”

Those words, “absent strong political and judicial action”. Are the words of the entire ‘conservative’ movement in my lifetime.  They are hollow, empty and feckless words in my observation.  They begin from a flawed premise and stand on a weak foundation. The Republic went wrong long before the 1960s and more laws nor court decisions - short of repealing a very large swath of cases - will fix things.

Joe Biden, as Dreher points out, the most moderate of all the Democratic candidates recently had this to say. 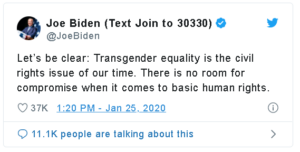 By implication, Biden means to use the full power of the Federal Republic, and the legal positivism it has come to embrace to see this through; your counter-worldview be damned, you be damned if you stand in opposition.

So, what of these strong political and judicial actions that Dreher suggests?  What can stand against the growing zeitgeist of absurdity - ideologies, and theories that deny the individual, deny truth, deny reality and in the end, rely only upon emotion and passion? When the very nature of metaphysical reality that was key to the development of Western Civilization, a Permanent Thing, is not only under attack but more alarmingly not even understood by many, how can politics or law change the direction?

More to the point, for there are many that would argue that legislation and the courts can save the culture.  There is something more fundamental.  How did we come to this?  Did it all really begin with poor implementation of good ideas in the 1960s?  Is the answer just to get back to the real intention of the Civil Rights laws?  Is it just that simple?

“First principles, Clarice. Simplicity. Read Marcus Aurelius. Of each particular thing, ask what is it in itself? What is its nature?”

The argument for and against right-reason began again in earnest in the West almost as soon as the Enlightenment began. Following a path from Immanuel Kant all the way down to the German School and eventually Postmodernism of the French School we can trace how good ideas were tainted and bad ideas were born.  Even Locke and Jefferson were polluted in portions of their writing and thought by bad ideas deriving from idealism and the German School. (The Rise of Absurdity in Western Philosophical and Political Views)

The Federalist borrowed some from Locke and much from Hobbes and leaned toward a Neoplatonic worldview in their vision of the American Republic. Thus, by the late 1780s, the seeds of the destruction of the Republic were already sewn. Those are polemic and dangerous words, not something spoken carelessly. It is also something simply not taken seriously by many, it confounds the entire American narrative.  Those objections, however, do not make it less true.

Of course, Federalism decisively won on the battlefield in the 1860s and the pragmatic reality is what we have in terms of government.  Legal positivism paved the way for progressive policies and laws to be implemented. Progressivism built momentum for a sort of community view of society.  This, combined with the emergence of Postmodern theory and philosophy created the era we now live in.

The ‘community’, or community of communities to take the Peter Drucker term for what has become identity politics, feels things about justice.  These feelings are easily implemented into policy, once the community has political power because we already set the stage for totalitarianism in 1861-1877 and followed it up by separating civil law from real justice through legal positivism.

The system, the one that we might call upon for strong political and judicial action was broken asunder long ago.  Taking power, enacting legislation or winning court cases in such a broken system would be flawed from the start - a totalitarianism of its own sort if one accepts that two vastly different worldviews now coexist alongside each other.

Lincoln, to some a conservative hero, set the standard that it is perfectly ok to suspend laws, make war against Americans and subjugate them over differences of opinion.  The Federalist Republic in the 1960s raised the stakes.  He essentially killed an entire opposing view of original intent and our founding. Our entire legal profession accepts, as fact, legal positivism and notions such as the incorporation doctrine.  The die is cast.

The very tools of totalitarianism are built right into the system, they have been growing since the early debates of the 1780s. At the root of it all is flawed ideology stemming from flawed philosophy. Once those that hold to the notion that there is no truth other than what the ‘community’ feels is fair they can implement totalitarianism under the rule of law Americans have allowed to become fact.

There is little left to stand in opposition to this.  Major protestant denominations are falling daily for elements of postmodern thought. The megachurch movement, built upon the notion of giving the community what it wants, will quickly turn to support this totalitarianism. That entire movement is built upon communitarianism, once those churches begin to fall, they will take the rest of authentic, organized Christianity with them.

Essentially this, the culture is lost, and the system of government was corrupted and tuned for future totalitarianism a long time ago.  All the keys and tools are right there for the taking.  There is little that can be done politically to turn the tide and only a few things that might slow it down.