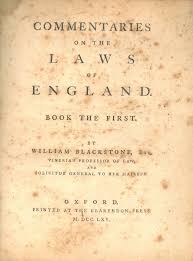 Blackstone begins, conducts, and ends his work with an acknowledgment of the foundation of the law, situated below the divine law, rooted in natural law and a creature of the accidents and circumstances of the people it is designed for. The ‘first and primary purpose’ of the law is to maintain and regulate absolute rights and in the case of those beneficiaries of British heritage, personal security, personal liberty, and private property.[3] Blackstone dismisses in his theory the notion of the original state of nature as having any contemporary relevance. He conceives of the circumstance of man where law forevermore requires a state necessary to enforce it and the impossibility of the destruction of law by law.[4] The foundational principles upon which law must be drawn in his view is custom or convention. He places a high value on deference to prior generations.[5] To Blackstone, the law is not reason, he is opposed to the “rage of modern improvement”[6] – the attempt to template reason onto law to achieve idealized ends. Blackstone saw the progression of the law as a slow process, over time, gradual and relying heavily upon and firstly on the decisions, customs, and conventions of the past. The view of jurisprudence held by Blackstone was best articulated by Burke as ‘a contract between the living, the dead and those yet to be born.’[7]

Numerous previous works have detailed the influence of William Blackstone on the generation of men that framed[8] the U.S. Constitution. Certainly, these men widely read Blackstone, as did many aspiring lawyers and politicians for subsequent generations. The question is not, did he influence them, the relevant question is what parts of Blackstone did they carry forward. We might, as many are apt to do, read the words of these men themselves to discern that answer. This is a wholly inadequate approach. If we begin by reading The Federalist, we would admittedly be reading a document of propaganda[9] intended to sway public opinion.[10] A work that, in more than one entry, contained examples of historical ignorance or perhaps outright deception.[11] If we are to truly understand the impact that Blackstone had on these men, we must examine their contemporary critics, what did they argue against in the proclamations in The Federalist that have proven true? We must look to the generation immediately following the framers to the political debates and to men like Calhoun that warned against the rising manifestation of ideological deficiencies previously warned about by the Antifederalists, to Tocqueville and his observations and warnings and perhaps finally to Lincoln and his war[12] that solidified and ‘corrected’ deficiencies of the Federalist ideology into the very Leviathan-like central state the Federalist promised would never arise.

Hamilton and Madison argued in The Federalist against generally held common sense notions that; only state governments could be free and republican, large countries turn to despotism and they are warlike. The opposing view observed that it is impossible to avoid these circumstances because the people must be vigilant, patriotic, and informed.[13] One can argue that every argument of those originally opposed to the Federalist position has materialized, and likely will only manifest more.[14] Their subtle references to equality over convention, natural law, subsidiarity, and the common good were a drastic departure from the prescriptions of Blackstone.

Tocqueville observed that passion for equality was compatible with both tyranny and liberty and democratic principles unchecked by morality and virtue could lead to unprecedented levels of tyranny.[15]  He saw the inevitable problems of the ‘march toward equality’, begun subtly with a few words in the Declaration of Independence, woven into the centralizing nature of the Federalist ideal of the Constitution. These notions were completed twenty-five years after Tocqueville's observation by war and a ‘second revolution’ by Lincoln. Materialism, mediocrity, domesticity (de-masculinization), and isolation were the dangers of the equalizing and centralizing plan of the Federalist. Tocqueville foresaw the tyranny of the majority that John C. Calhoun attempted to thwart[16], and that no breakthrough in education could raise the poor to the level of sufficient knowledge to rule.[17] To thwart these dangers Tocqueville saw the need for subsidiarity and morality. ‘Democratic expedients’ such as local self-government, a free and independent church as a societal institution, independent judiciary, and associations were required.[18] Finally, in agreement with Burke and Blackstone, Aquinas, and Aristotle, he saw freedom as impossible without morality.[19]

It was the Jacksonian democratic dream that Tocqueville observed in 1835, and warned of the potential dangers of. A few short years later, in 1842, it was Calhoun that warned of an ‘American political nightmare’.

As the Government approaches nearer and nearer to the one absolute and single power, the will of the greater number, its actions will become more and more disturbed and irregular; faction, corruption, and anarchy, will more and more abound; patriotism will daily decay, and affection and reverence for the Government grow weaker and weaker, until the final shock occurs, when the system will rush to ruin, and the sword take the place of the law and Constitution. [20]

It was Lincoln that completed the centralization and transformation beginning in 1861 in what George P. Fletcher observes as a second constitution after 1865. One based on “organic nationhood, equality of all persons, and popular democracy” concepts in opposition to those of our first constitution which promulgated “peoplehood as a voluntary association, individual freedom, and republicanism”.[21] These new principles align very well with the foundation and words in The Federalist, yet at a base level, they are completely detached from the whole of Blackstone’s philosophy.

Thus, it can be argued the Federalists were wrong, the very things they denied, and their opponents predicted occurred.  They were wrong because they applied only a positivist interpretation of Blackstone and ignored his reliance on foundational matters; the source of law[22], the importance of subsidiary institutions, of checks and balances, convention and ultimately of the role of morality and of institutions that engender morality.  This was an ideology based upon defective philosophy[23], ultimately it was deceit we have been warned to avoid (Colossians 2:8). Blackstone’s influence is still immense, legal positivism is derived in a perverted way from his philosophy; this, of course, does not comport with his meaning as it lacks the prudence in the spirit of the law that Montesquieu, Blackstone, Burke, and even Tocqueville would prescribe. There is little else he might recognize or approve of in our system.

[2] ‘Tenuously derived principles’ here is meant to imply that if one strips from Blackstone his conception of the foundation of the law, the relationship of the civic and common law to natural, revealed and divine law and retains only his principles of the progressiveness of the law one arrives at legal positivism.

[8] As Burke stated, ‘the dead are not founders’ (Strauss, Cropsey., p. 697), America was certainly not ‘founded’ in 1776 nor 1789. The Constitution framed and ratified in 1789 merely formed a central government limited in powers by the sovereign states.

[9] Coenen, Dan., “A Rhetoric for Ratification: The Argument of The Federalist and its Impact on Constitutional Interpretation” Duke Law Journal, Vol. 56:469. https://scholarship.law.duke.edu/cgi/viewcontent.cgi?article=1303&context=dlj. p. 472.

[11] J.R. Pole. The Federalist. Hackett Publishing, Cambridge,  2005. p. 87. See Hamilton in Number Sixteen, “I confess I am at a loss to discover what temptations the persons entrusted with the administration of the general government could ever feel to divest the states of the authorities of that description.” Such usurpations were amply observed in history prior to this statement and have been rampant in U.S. history since ratification.