A 20-Year Saga, From Boot in Your Ass to Our Butts in a Sling

There will be much haranguing, memeing, pontification, posturing, and gnashing of teeth over the next few days concerning what is happening and what might in a worst-case scenario in Afghanistan. Many will politicize this all, blaming it on the incompetence of Biden. Others still will lament the blood and treasure deposited in the soil of that far away land. I am not writing about all that here.

It has been twenty years, in just a couple of weeks since 9/11 and Tobey Keith’s song The American Way. It has been thirty-three years since Rambo went to Afghanistan to fight those godless Soviets alongside the Muhjadeen. It was forty-one years ago when I sat with my father on the couch watching Dan Rather report from Afghanistan about the Afghan tribesman, the modern "noble savage” fighting the Soviet Goliath. To some perhaps Afghanistan is something of a movie, I understand that The Outpost became very popular with progressives for some reason a couple of years ago.

But it is no movie. The Afghan people are *decent, complex, and actually, diverse ranging from cosmopolitan to rustic, speaking numerous dialects and consisting of numerous ethnic groups; almost all universally proud and stoic.  The landscape is rugged, extreme, at times unforgiving, but very often beautiful. It has at various times been called The Crossroads of Asia, and The Graveyard of Empires; both are accurate.

* there is a decadent undercurrent that I will not discuss

One cannot stand on the northwestern side of the Kyber Pass and not feel connected to something ancient. Not just back to Kipling, although there is no small tinge of that, but to the Silk Road and how that affected history and culture for most of the world.

Many will proclaim in the coming days that the present debacle and the potential for an outright tragedy will spell doom for American national security policy and efforts. That is absurd and small-minded. The high-water mark for American exceptionalism and Empire came and went long ago. Only the fools, the ignorant, and liars deny that. This will have an impact, even if the US Embassy is evacuated without serious incident, but it was not our seminal moment, this was not Pickket’s men just reaching the center crop of trees in 1863. It is certainly not our Battle of Omdurman (1898). If we are honest, our Omdruman probably occurred during the Tet Offensive in 1968.

Others will argue that our hasty retreat, leaving our former and erstwhile allies in a lurch, will only serve the interests of China. China has already intimated that if the Taliban can rule, keep extremism from affecting Chinese interest and out of China proper, that they can do business. China knows something about geopolitics that the West forgot once we allowed our notion that everyone we call friend ought to be ‘democratic’ and promote transgender studies at all their major universities. They are more pragmatic, more machiavellian, and yes, this will benefit them. But ultimately, that is not the big story here.

Internal inevitably and invariably affects external. A nation cannot operate an empire when mired in corruption, graft, grift, greed, and petty politics at home. The Romans taught us that. And yes, that is what US foreign policy has been about, not through colonies but essentially through client-states and satrapies.

Watching videos of the Taliban’s advance, I am struck by one thing, Arabic. In Afghanistan, Arabic is the language of the mouque for most. Those fighters, so overjoyed to capture and use US-provided equipment and weapons as they ‘free’ Afghanistan are not Afghanis in large part, they are Arabs, Turks, and others. I was in Fallujah in November of 2004. I saw the murder houses, I know what is in store for many Afghanis.

What happens over the next few days, well it could be tragic. The State Department only this week issued an emergency advisory for Americans to leave the country. It seems apparent that intelligence assessments were flawed or unheeded, people in charge did not know the Taliban would and could advance so rapidly, across all but two major cities.

Given my personal observation of the Afghan National Army, and considering it must be demoralized, shaken, and suffering from unprecedented absenteeism (and 'unprecedented' in that regard speaking of that Army means a lot), I place zero confidence that the ANA can or will hold anything resembling a green zone around the embassy district and the Karaizi airport. Current US intelligence estimates, that they publically briefed, state Kabul could fall within 90 days - that is a ludicrous assessment, far too optimistic and unrealistic. I suspect if the Taliban is serious about it that it could fall within a week.

Within the last several hours the Pentagon announced 3,000 troops, *mostly Marines to Kabul. Marines are the best soldiers I have ever served beside, but this is an over-the-horizon insert, they are essentially light infantry in an urban environment, far from persistent CAS, logistics, and reinforcements. Yes, I am implying a worst-case scenario, but not impossible.

*Two marine battalions, one Army, with a battalion of the 82nd Airborne headed to Kuwait as a quick reaction force (QRF)/911. The UK is also sending a battalion-sized element, approximately 600 troops. This augments what appears to be about 650 troops, mostly marines assigned to security at the embassy. All of that is light infantry, without (most likely) the organic aviation assets available within the MEU and without any of the Army's armored capability.  Do the math, look at the terrain, consider the implications. What happens if/when these forces require JTAC, just to survive, it would decimate Kabul. This is a pickle no matter which way you turn the picture.

(side note, if someone had planned ahead they might have sent over a Styker battalion in say June, before making ill-advised announcements, then once the embassy was eventually abandoned, as common sense dictated would be necessary they could have just left those POS  there - the vehicles, not the Joes - for the Talis to play with and break. I was not consulted, otherwise, well...)

Take a look at the images below, notice the elevated terrain north, less than a kilometer from the airport. Then consider the urban terrain that surrounds the embassy and the major road between the two. 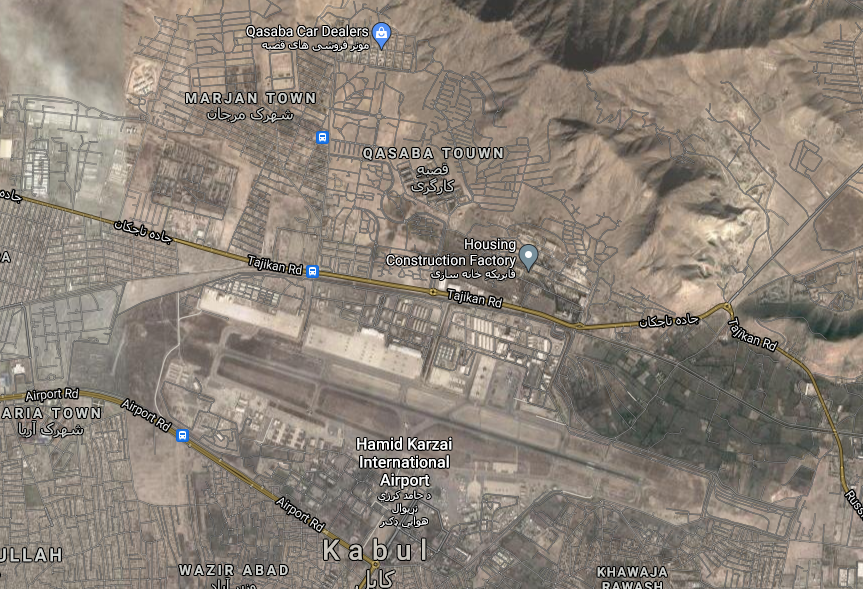 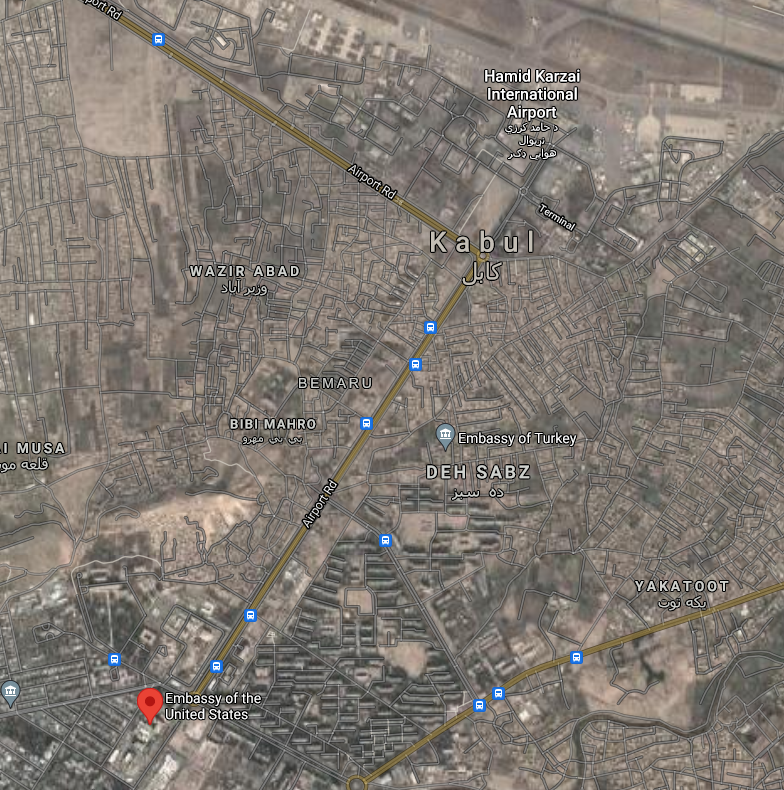 I am not predicting doom. I am however considering the mind of the Taliban. China will do business with them regardless once they seize power. They are not enticed in the least by US pleas to please not attack the embassy. What a mighty feather in their cap to not only make the US leave, with its tail between its legs but to bloody its nose in a way unseen since the Vietnam war. If I were a Taliban general, I would throw every asset I had toward taking Kabul within the week, denying access to the airport, and then grind down those Marines that will soon be landing. Y’all just pray I am wrong.