The New and Improved US Army Signal Corps

I have been associated with the US Army Signal Corps since 1985, yes sir, that is over 33 years.  For the majority of that time, I have been disappointed with the leadership, direction and culture of the branch.  I tried at various times to divorce myself from the branch, once when offered a menu of options I choose to accept a cash payment in lieu of a transfer and I regretted that decision often.  My views, more or less have always been consistent with the observations I made recently in a post called “Three questions that defined the US Army Signal Corps“. It has been my considered opinion that the branch produced some of the worst officers in the Army.   In my estimation, we have been led over the years by generals that simply did not get it.   The branch, historically, has been burdened by an entrenched bureaucracy at Fort Gordon that was generally out of touch with what the warfighter really needed and often incapable of innovative thought.

I recently discussed my observations out at the National Training Center (NTC) and my assessment is that the Signal Corps continues to fail to provide the types of mobile, agile, secure systems the warfighter wants and needs.  Worse, tactical skills and acumen among Signal Soldiers are, in my considered opinion, at their lowest point in the 33+ years I have been around.  However, upon returning from the desert I saw a reason to hope for a better future.

I contend and will continue to assert, that it was wasteful and stupid to create the Cyber branch.  The roles and functions of that branch are not unique or different enough from what the Signal and Military Intelligence branches were capable of doing.  Creating a new branch just added waste, bureaucracy and desynchronization.  However, it is a fiat accompli, it is done.  With this change, I think the Signal Corps has the opportunity to divorce itself from the computer geek image and culture and become relevant teammates, partners and supporters of the warfighter.

The contract I was working came up for renewal last Friday.  I was offered the opportunity to stay on with the new company, with a significant raise.  However, something interesting happened last Thursday.  I received the offer letter from the new company but I also received an offer for a GS position with the Signal School.  The GS position was for much less money, it is not the ideal role and I probably will not have much of a voice unless I find a way to work myself out of the dungeon.  The thing is, I sense something new is going on in the Office of the Chief of Signal and the Signal School.  I wanted to be part of that.

The contract position was with Capabilities Development Directorate (CDID).  That organization is filled with old bird Colonels that should retire, old GS employees that have been on the job too long (most that have been promoted far beyond their capabilities).  CDID is a dead, old, slow, cumbersome beast that has produced bad doctrine and poor materiel solutions.  The money was nice but CDID, as it stands, is the past, a boat anchor!

Fortunately, the future looks good.   Pieces and parts of what is now CDID will soon have to vet their ideas and products through the Signal Branch, instead of developing doctrine and solutions in a vacuum of old tired heads.

Training is moving out from behind computer monitors into the field.  Soldiers are being trained, for the first time in a long time to be warrior technicians instead of geeks.  Additionally, the model of training is giving way to education, a point me and others have screamed for over the years.   If you educate a young man in the fundamentals he can, over a career, master many skills as opposed to trying to train him in a short period on things that quickly become irrelevant.  These are good changes.

I cannot say with certainty if these changes will hold. It is impossible to know if the vanguard of old heads occupying desks and cubicles will coalesce to inject stupid into this progress.  I also cannot know if I myself will be around as a GS employee long enough to see any of this come to fruition.  As I said, my current role is certainly not intellectually compelling.   However, I do, for the first time in 33 years have great hope for the Signal Corps and I am very happy that at this point in my life and career I have the opportunity to be part of the change. 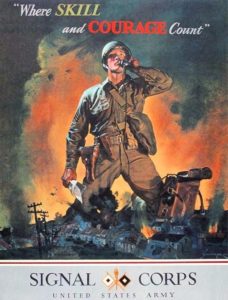 2 thoughts on “The New and Improved US Army Signal Corps”