Leading others away from truth and into lies is wrong. When prominent people do that persistently for their livelihood, creating and spreading false stories, it’s called grifting and fraud. I see you. I SEE YOU!

Let me give you an example or two.

In March 2017, podcast host, Dr. Dave Janda broke a story brought to him by retired LTG Tom McInerney and Adm Ace Lyons. McInerney, until then, had been a Fox commentator.

That story of The Hammer “spying system”, exploded across the Internet and was so big that it earned a place in the “Strzok-Page text” messages, during the still ongoing Trump-Russia-Hoax.

Two ‘journalists’, Mary Fanning and Alan Jones made their website the central depository for all things they connected to THE HAMMER story and Fanning and McInerney were soon invited to @WVWOnline, the videocast of Brannon Howse.

Fanning and McInerney told "their story" many times and even published a book, in August 2020, about "The Hammer" which you can still access for only $ 4.99.  Millions upon millions of people believed because numerous podcasters repeated the tale.

Followers of the Qanon conspiracy theory, mostly ordinary Americans who know that something is not right with the direction the country is headed, latched on to the Hammer story and spread it even more. There are many similar examples of the Hammer story shared by Qanon followers on social media.

AND THEN, just before the 2020 Presidential Election, the story morphed. Fanning and McInerney told Steve Bannon and Brannon Howse that a program called SCORECARD would be used with The Hammer to change the outcome of the election so that Joe Biden would win. How could a former CIA agent turned journalist and a retired general know such a thing?

Soon Mike Lindell joined forces with Brannon Howse and Mary Fanning to "expose" the theft of the 2020 election.  The trio of them produced three full-length documentaries. Lindell staked everything on that one, still unproven, story that originated in March 2017. A story that The Conspiracy Theory Club profited from since Dave Janda released that first fake Kraken in 2017.

Lindell has set up a "Cyber Symposium" for August 10-12 and has invited anyone to disprove that the election was stolen by means of the object of the March 2017 made up story – Hammer and SCORECARD. Drawing dozens to Lindell’s symposium is a $5 million carrot for anyone who can prove there was no foreign interference with the 2020 election.

There is much doubt whether Mike Lindell has irrefutable evidence of fraud that would prove, at least, that the McInerney/Fanning Hammer/SCORECARD story is true.  The concern expressed by Jeff Nyquist, is that failure to do so would inflict more damage on the wider election fraud story. Yet, Jeff himself failed to point out that it was Brannon Howse who provided cover, exposure, and technical support for Lindell’s story and production of three movies. In fact, Mr. Nyquist denied that Howse had worked with Mary Fanning to broadcast the Hammer story prior to November 2020 – a fact easily refuted with a simple search of the Internet. Why did Mr. Nyquist call out Brannon Howse and not Clare Lopez of Citizens Committee on National Security and Vice President for Research and Analysis with Center for Security Policy, who also used, former CIA agent, Mary Fanning as a source? Ms. Lopez states here, that Mary Fanning is her source on the “Club-K/Gulftainer” story, which was also investigated extensively by George Webb and another former CIA agent, Robert David Steele. Election 2020 came, and wouldn't you know it - the election outcome was questionable. No problem - they were right! - Fanning and McInerney, again made the rounds of the "Conspiracy Theory Club" explaining what had happened.

John B Wells picks up the story, “The Hammer Is Key To The Coup”

No less than five well-known publishers and their regular commentators have used Mary Fanning’s and Lieutenant General Thomas McInerney’s storyline to convince the public that somehow a known surveillance system facilitated vote-switching in the 2020 Presidential election. These publishers saturated both the “truther” movement and Qanon followers with the same unprovable information not once, but twice.

Next, we will take a closer look at Mary Cunningham Kirchhoefer (Fanning).

A few days after it was published, this piece, “Absolute Sabotage: The Rise and Coming Fall of a False Narrative” by Jeffrey Nyquist, appeared in my Twitter feed.  Mr. Nyquist outlined a series of events that informed him of a possible “trap” that could impact far more than Mike Lindell’s credibility in is his claims of electronic election interference in the 2020 Presidential election and he seemed to hold Mary Fanning responsible for creating the situation in which Lindell might find himself if he fails to deliver evidence he has promised. But Mr. Howse has played a much larger role in events involving Mr. Lindell than Nyquist gives him credit. This is not a story of a stolen election, but a story about people who came together to create a narrative about an election they seemingly knew could or would be stolen.

Sidney Powell gained recent fame as an outspoken critic of the Department of Justice prosecution of Lt. General Michael Flynn for FARA violations.  Ms. Powell later became Flynn’s attorney while LTG Flynn was awaiting sentencing after his guilty plea. LTG McInerny’s fame grew from an accusation that he and Adm. Ace Lyons made on the Dave Janda show in March 2017 that one Dennis Montgomery, a former government contractor, insisted that former President Obama had directed James Clapper to use a “secret computer system,” nicknamed The Hammer or Hamr to spy upon prominent Americans including judges and politicians.

That story has been debunked since Mr. Montgomery’s lawsuit was later dismissed and other stories about Montgomery had been proven to be fabricated tales. Despite her charges being unprovable, journalist Mary Fanning pushed the story of the Hammer on her website.

Soon, WorldViewWeekend.com founder and conspiracy theorist, Brannon Howse, would broadcast Fanning’s wild and misleading stories on mass spying. This story was shared millions of times on Facebook, Twitter, Instagram as months and years went by – there were still believers because the story sounded so convincing because of the U.S. Government’s alarming actions in pursuing those who helped Donald J. Trump become the forty-fifth President of the United States.

Fanning had published an article on October 31, 2020, claiming that Biden was “stealing the election “just like Obama had done in 2012.”

On November 2, 2020, Lt. General Tom McInerny called into Steve Bannon’s show and proclaimed that President Obama had used a tool called SCORECARD to access and change votes in the 2012 election and that Joe Biden planned to do the same in the 2020 Presidential election to ensure that he won.  Bannon asked McInerny to state his credentials. Bannon then reinforced McInerny’s point by stating that “Hammer was a very effective tool used after 9-11 to monitor jihadis.”  McInerny continued that Sidney knows all about it and that they “know where it is.”  Bannon then asked about Dennis Montgomery and his involvement in these new accusations. This even though Montgomery’s case had been dismissed.  There was no evidence presented that might prove McInerny’s case.  In Bannon’s defense, he did ask Sidney Powell why his WarRoom Pandemic audience should believe him.  Powell offered zero evidence either.

On November 4, 2020, Brannon Howse enlarged McInerny’s tale when he hosted Mary Fanning and LTG McInerny who repeated their concerns nearly word-for-word. Over the ensuing weeks and months, others joined the chorus with Mary Fanning, Brannon Howse, and Mike Lindell – in a song based ENTIRELY (in practical terms) upon Lt. General McInerny’s claim that the “election was stolen electronically” through switched votes.

The three produced a 3-hour documentary with guest appearances by Matthew DePerno, Russ Ramsland, and Col. Phil Waldron. Howse frequently includes unaware and/or compliant guests such as the three above, who were involved in investigating and testifying about questionable election happenings. Others include Gordon Chang, Rich Higgins, and even LTG Mike Flynn, who Howse claims gave his post-pardon interview on worldviewweekend.com in December. Mary Fanning then echoed Howse’s Flynn interview under her own byline on Howse’s WVW website. Does Mary Fanning work for Brannon Howse?

In early July, Mike Lindell announced that “Trump would be re-instated on August 13th” once the evidence comes out at his planned Cyber Symposium on August 10-12.

And then, on July 22nd, Jeffrey Nyquist dropped his bombshell

Do you see the problem? Howse says the CIA is “behind the coup d’etat” yet his partner Mary Fanning is “former” CIA – is there even such a thing? 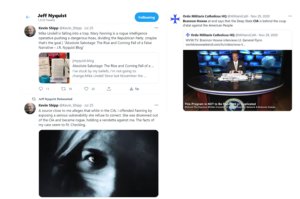 The entire story is rooted in the story of “The Hammer” spying tool and a program called “SCORECARD.” It is also a story that no one else has told and it provides no evidence at all.  Mike Lindell’s entire life, for the last nine months, has centered on a fabricated piece of disinformation.

Let’s not forget, it was Howse who produced, for Lindell, three full-length documentaries: “Absolute Proof”; “Absolute Interference”; and “Absolutely 9-0.”  It was Brannon Howse whose IT people developed and launched Lindell’s “not really” Social Media platform, Frank Speech.

So, I will ask Mr. Nyquist: Shouldn’t you give at least equal credit to both “influencers” Mary Fanning and Brannon Howse as “people with platforms” who have “mislead thousands?”