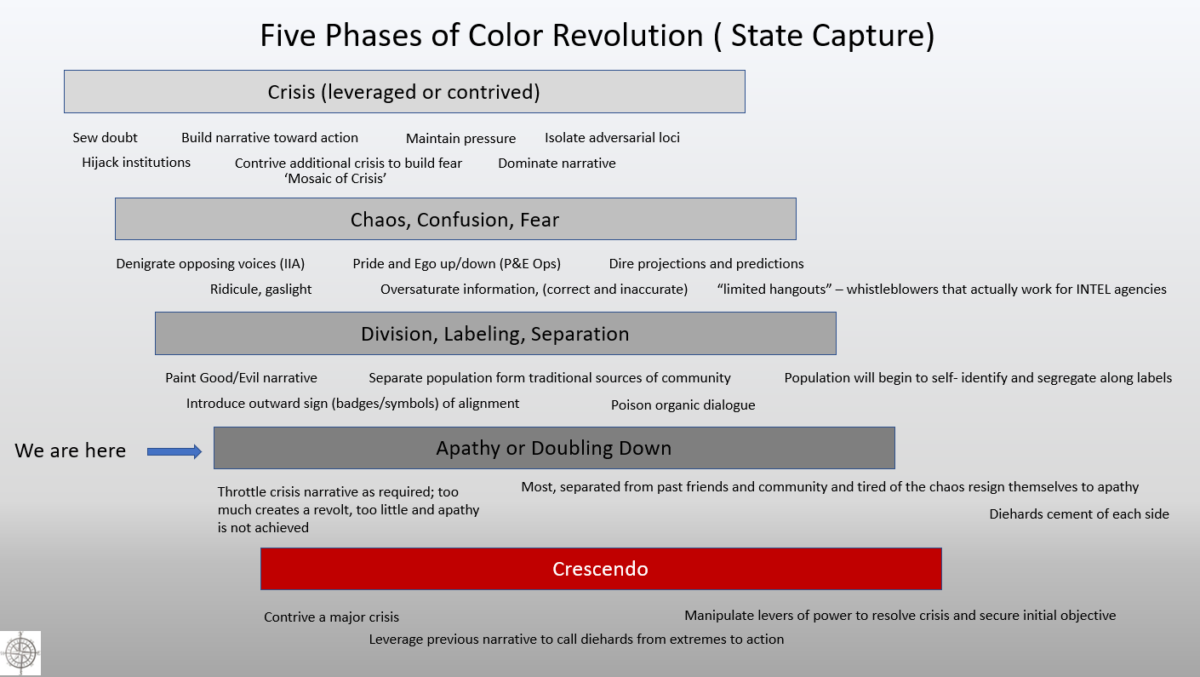 It seems the term ‘color revolution’ is popular suddenly. Last evening, I noticed an enormous spike in traffic, all to one article Our Color Revolution, beginning just before 9 pm. It was because of Tucker Carlson, he had Darren Beattie on for a couple of minutes to discuss three Revolver News articles discussing a color revolution in America. (see Color Revolutions Explained for background)

Most people have never heard of a color revolution, that includes the dozens of writers in the punditry class that will now shill formulatic five-hundred-word articles today on the subject. Suddenly they are instant experts on a topic that before yesterday their knowledge was, at best, PowerPoint deep.  They will write  to tell you that this is a crazed conspiracy theory, or that this is all just about one thing “getting Trump”, the approach will represent their bias. Both are wrong, they miss the forest for the trees.

I first suggested to a small group in mid-April that what I was observing in America contained many elements of a color revolution. Otherwise intelligent people scoffed at the idea. In my observation, entirely too much of what occurred related to COVID-19 was simply too coincidental. There is no space to get into that here, there is clearly a virus but too much about the reactions by governments was too synchronized, too ‘unprecedented’.

I will say this, without real evidence. I am fairly convinced that the US would not still be experiencing lockdowns in September if the BLM protests and riots and defund the police movement did not begin in May.   Why?  By May many Americans were getting not a little bit angry at the police for arresting mothers at the park with kids and gym owners and hairdressers trying to work. Americans we not going to tolerate drastic lockdowns for long, our opinion of the police was turning. Queue the rioting and defund the police protests and a large segment of the population that was wary of the police and the government a few months ago is now calling for the insurrection act to be invoked.

Say what you will about those individual issues and the separate motivations – it is undeniably true that there are now people supporting police action, masks, and lockdowns that without the riots this year would have been in the street protesting police overreaction. We have been separated, almost perfectly in classic color revolution fashion.

I will break down how and why I believe there is a relationship between everything in 2020 in a later article. This is more complex than a left/right thing it is not just about Trump, it is not just “Russia and bots”, it is not just ‘Soros’. I have yet to see anyone cover this topic in full details – from tooth to tail – all that try to get lost in the weeds on one of the common assumptions.

I just wanted to post a few thoughts today before all the clueless pundits at the major outlets begin publishing their vaporous pieces of propaganda.

None of this just started, it is part of and enabled (possible because of what I call the Great Unraveling others The Fourth Turning). In order to pull this off groups had to work for years to infiltrate and usurp institutions (media, academic, corporation, government and military – not entirely but just enough)